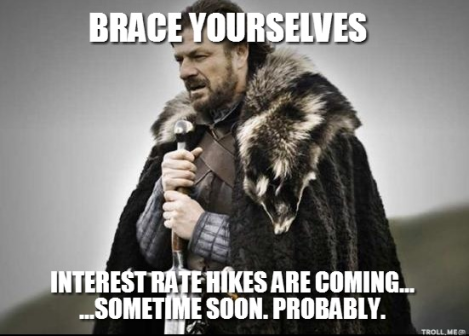 Get ready! Hold your breath: the South African Reserve Bank (SARB) will announce its decision on the interest rate Thursday afternoon. After January’s surprise 0.5% increase the SARB has repeatedly warned us to expect further increases in the future and yet according to most financial experts that future isn’t tomorrow.

Still, don’t be too surprised if it does go up! The South African economy remains in a precarious position and as a result uncertainty is much higher than we’d all like it to be.

Pressure for a rate hike comes from the Consumer Price Index (CPI) which tracks inflation: I’m sure we’ve all been shocked by the price of our monthly shop in the last few weeks. CPI figures released on Wednesday suggest that inflation has breached the upper end of SARB’s target band of the 3 – 6% and currently stands at 6.1% year on year for April 2014.

Speaking against the hike is the fact that growth figures for the local economy have remained sluggish, forcing the SARB to revise its projections downward. We’re simply not selling enough of our products overseas and most of us are tightening our belts and can’t pick up the slack. An increase in the rate will see more cash being used to service debt (and South African’s are already starting to drown in it) and less available for consumer spending. This would only put further pressure on the economy.

The rally in the Rand’s strength against major currencies from mid-April into May will likely see inflation figures sink back into the target band (as it reduces the cost of imports) and this does give the SARB some breathing room. It is this rally in the local currency that has the majority of economists predicting no movement in rate this month.

But given the continued strife in the mining sector, sluggish growth in the rest of the South African economy, the tapering of stimulus by the US Federal Reserve and likely interest rate hikes in South Africa’s major trading partners thanks to inflationary pressures it is hard to imagine that the Rand’s woes are over. This means that current strengthening is only a temporary reprieve and the SARB might (and I would argue should) pre-emptively shore up the Rand by increasing the rate now, particularly in light of the seemingly inevitability of such an increase this year.

With all this in mind, I’m going to go way out on a limb and predict an unprecedented rate increase of 0.25% to see the SARB’s interest rate stand at 5.75%.

While every measure has been taken to provide readers with the most accurate information and honest analysis, it must be stated that the changing nature of finance and banking in South Africa as well as the unique circumstances of any individual applicant mean that not all information supplied can be used by all readers and the accuracy of information is only guaranteed at the time of writing, not reading.

Please use your discretion before taking any decisions based on the information provided and, better yet, contact us with questions and queries. Our services are free and we will provide you with the most up to date information available. We would love to assist you.

De Mink Property Finance Consultants will not compensate you in any way whatsoever if you ever happen to suffer a loss/inconvenience/damage because of/while making use of information in this blog.